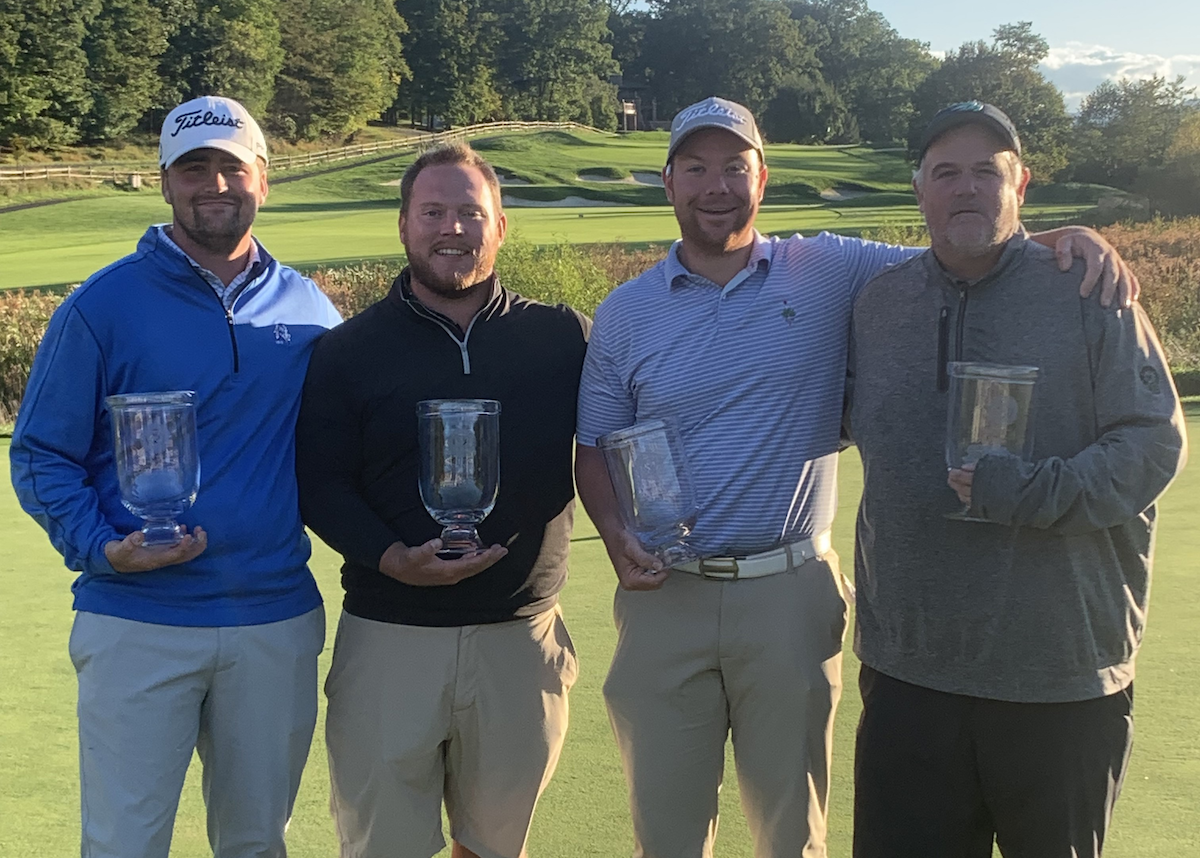 The team from Connoquenessing Country Club after winning the Jamison Cup Inter-Club Finals at Bedford Springs Resort. The team was represented by: Garrett Schlick, Brent Rodgers, Paul Ajak and Rob Stoops (From left).

Fall golf can be a wonderful thing with the leaves changing colors and that crisp coolness that greets golfers in the morning.

And there was some of that Monday when the Jamison Cup Inter-Club Finals were held on the Old Course at Bedford Springs Resort. But, there was also this.

“It was a brutal day out there, making scoring pretty tough,” said Garrett Schlick of Connoquenessing Country Club.

The Old Course is a good one. At 6,700 yards, the elevation changes and long holes, it’s a tester. How tough was it out there? There were no under-par rounds the entire day.

“This was my first year at the club,” said Schlick, a 24-year-old engineer. “It was really a good win for the team.”

The win was made even more special because it was a two-shot victory over Oakmont Country Club, traditionally the strongest team in any of the team events that are held.

The event is set up this way. Thirty-six holes of stroke play, a modified college format with the best three scores of four counting in each round. All players on a team must be members of the club they’re competing for. As many as eight players, four in each round, can play for each time.

Tom Summers, of Oakmont CC, finished a shot back of Schlick and Sorkin, is a 33-year-old attorney from Pittsburgh, was proud of how he played.

“I’ve played in this event a couple times and I really enjoy it, enjoy playing with the Oakmont guys,” he said. “I don’t get out a lot, play once or twice a week, but this is a good one to play in. The course was soft, but it was really windy. And that made for some fun shots out there.”

With high schools and colleges back in session, the age group in the Jamison skews toward somewhat older. Rob Stoops, another Connequenessing player, tied for third with Summers and admitted how big a deal beating OCC was.

“For us to hold off Oakmont like we did was special,” Stoops, who is 52 and works in real estate, said. “When you realize it was us and Oakmont, it’s nice be in the conversation. We hung in there and it turned to be a good day.”

The winners had a two-shot lead after the first round and that turned out to be the difference in the end. Connequenessing, Oakmont and Sewickley Heights all totaled 225 in the second round.

The Jamison Cup has been played at Bedford Springs Resort and is the final West Penn Golf Association championship of the season.