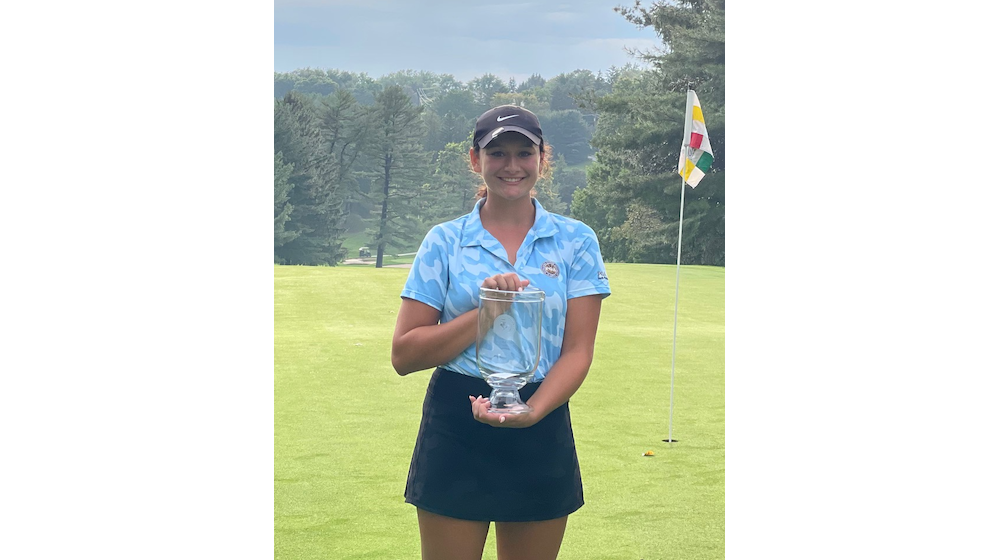 Just like the 2021 match play event at Hannastown Golf Club, Marissa Malosh and Lihini Ranaweera played in the final group on the second day of the event. And after the last putt had dropped it was Ranaweera who won 2-up, thanks to birdies on the 13th and 14th holes.

Fast forward to 2022. There they were the same two girls in the finals on a stormy day at Arnold Palmer’s Latrobe CC. The morning semifinals went off without a weather hitch and the girls went off in the finals, getting to second green before the weather warning siren sounded. The boys were just about ready to go to the first tee when that siren sounded.

The delay wasn’t all that long but made schedules irrelevant. The two pair got back out on the course and played until a 4:05 suspension of play. This time the delay was longer, there was much more rain, but conditions improved enough later in the day to complete the tournament before dark.

And this time the scenario was flipped. The two girls battled the entire afternoon, with neither getting up by more than three. Malosh held the upper hand the entire match but stumbled just a bit coming to the final holes.

She brought a 2-up lead to the back nine, but Ranaweera, who is from Cranberry, got one back with a birdie on 12, to cut the lead to one and that soon turned into a tie when she lost the 14th to tie the match. And then Ranaweera took the lead with a birdie on 16.

“I was up by three, had one bad hole and suddenly I was down one with two to play,” Malosh said. “I was up the whole round until 16.”

At that point, things could have gone a couple of way for the South Fayette High School senior-to-be. She could have continued what appeared to be traffic fall or she could quickly get refocused and get back to the way she had been playing.

“I had never been dialed in that like before,” Malosh said. “And I was so focused the whole day.”

“I’ve won a Hurricane event before, but this is probably the biggest one I’ve ever won,” Malosh said proudly. “I’ve never been dialed in like that before. It’s the best way I’ve ever finished. It will be nice one to add to my resume for sure.”

Malosh appropriately gave Ranaweera a great deal of respect for how she played.

“I play with here a lot and it’s always a good competition,” she said. “Our match was so close last year, and it was such a great match today. I feel really great, I really do.”

Malosh hasn’t made a decision about her college future, although she has prepared herself with plenty of information. No doubt she’ll come through with the same resolve that she showed in winning the Girls Match Play Invitational.