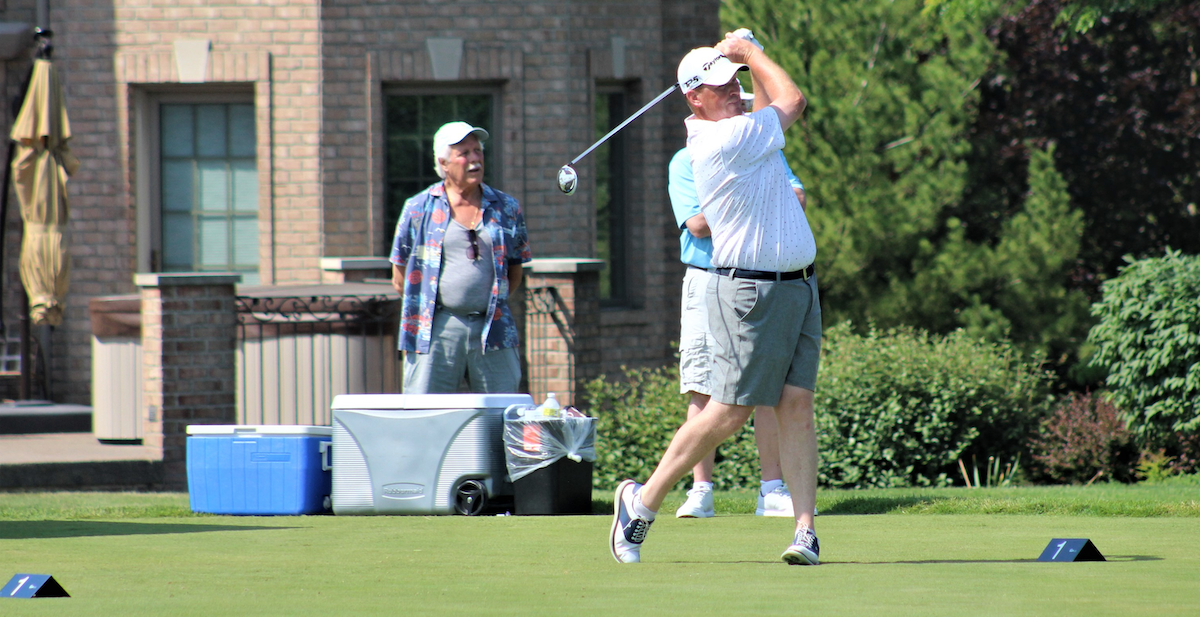 Rob McClellan teeing off #1 at The Club at Nevillewood

McClellan takes a two-shot lead into final round
By Mike Dudurich • June 21, 2022

Things heated up Tuesday in the second round of the West Penn Open at the Club at Nevillewood.

First, and most obviously, the temperature topped out at near 90 and whatever stress the players had was multiplied many times by walking and some carried their bags and tried to take apart the Nevillewood course which has gotten hard and fast.

It’s a spectacular course to hold one of the West Penn Golf Association’s major events.

And second, that heat manifested itself on the scoreboard as players tried to put themselves in position to compete for the title today. The leaderboard is filled with top quality players, including some previous champions.

The field was cut to the low 32 players and ties and when tee times get started, there will be plenty of heat on every shot as players battle not only for a high finish, but for a chunk of the lucrative prize pool that’s offered for the Open.

“It was gettable out there today,” said Slippery Rock Golf Club professional Rob McClellan, after posting a 68 and taking over the lead at 6-under par. “I got it today and if the weather like this again tomorrow, it will be gettable again.”

Devin Gee, the first-round leader, had a 72 on Tuesday and is in a second-place tie Alec Stopperich of Venetia, who shot a 71.

“I had two three-putts on the back nine which didn’t help, but I hit my driver as well as I have in a couple months,” Gee, who won the Open in 2016, said.

Neal Shipley, an amateur from Pittsburgh, put together a 69, to finish at 3-under.

And then came the biggest logjam on the scoreboard. Beau Titsworth, Matt Gurska, Darin Kowalski, Mike Van Sickle, Brett Young and Kevin Shields all are in at two-under par.

“I felt good about my back nine today,” Van Sickle said. “I think I may have had the shot of the tournament today. On 15, I hit my second shot with a three-wood, and it traveled 305 yards and I made the putt for eagle. I got my speed back today so that was very encouraging.”

In terms of how the final round might go, with McClellan holding a two-shot lead, he will determine how things turn out. There are probably seven of that top tier of players who are capable of winning, but only if he plays in such a way to allow himself to get caught.

“The way I see it is, if you can get the ball in play, you can score,” he said. “I’ve been playing pretty well and look forward to tomorrow.”

McClellan won the West Penn Open at Nevillewood in 2011 and, of course, that gives him a boost of confidence going into the final round.