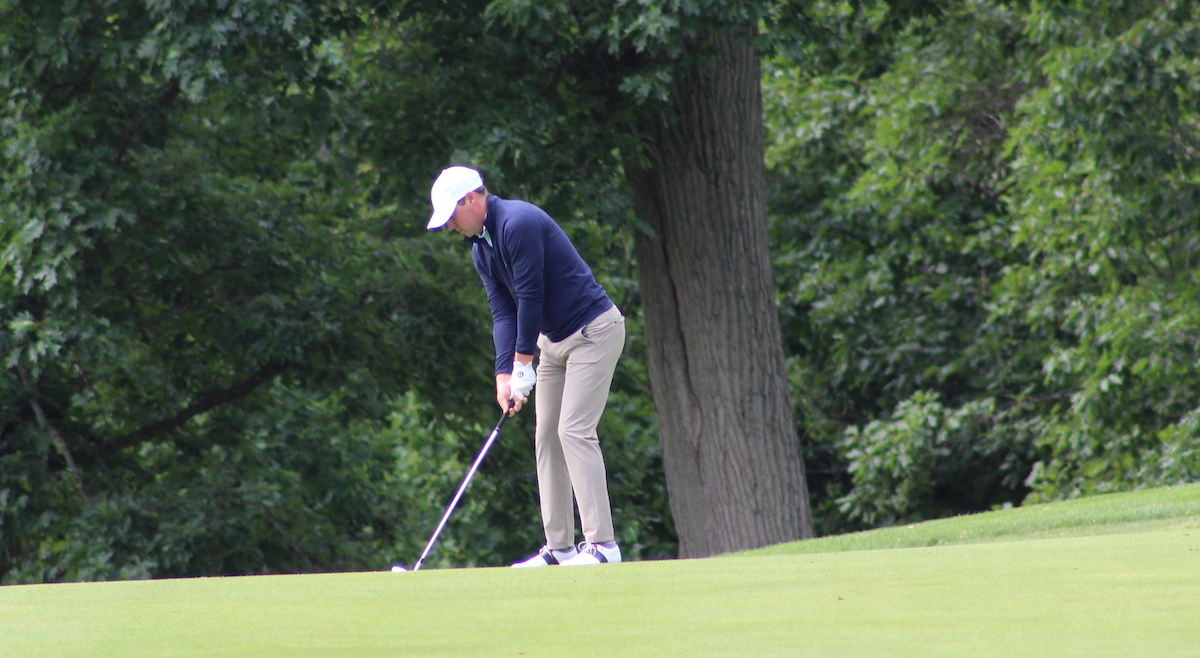 Devin Gee competing at The Club at Nevillewood

When you put together the combination of a high-quality golf course and a solid field of amateur and professional players, the unexpected should always be the expected.

And that’s basically the way it worked out Monday at The Club at Nevillewood in the first round of the 119th West Penn Open Championship. Even though the day started out a bit on the chilly side, it turned out to be a perfect day for golf, especially since the wind decided to take Monday off.

No matter how well the guys at the top of the leaderboard played, Nevillewood defended itself quite well with only seven players finishing their rounds under par. The best of those was the four-under par 68 fashioned by Oakmont Country Club Devin Gee.

“The course was spectacular today and I played well,” Gee said. “I’ve been struggling with my driver recently, but I didn’t hit it too badly today.”

Gee was asked if he makes frequent trips to the range in an effort to solve those driving problems.

“Nope, when I do that, it only gets worse,” he said after making five birdies and one bogey in his 68. “I just try to think about what’s ahead of me.”

Kevin Shields leads a group of three players who finished at three under 69.

He made five birdies, one bogey and one double bogey.

Shields, who won the Open Championship in 2010, said he seems to always have trouble getting comfortable at Nevillewood.

“That might seem strange to say, considering I shot 69, but even though you could land a jet on some of these fairways, I have a hard time getting my lines on the tees,” Shield said. “But I’ve been playing well and hopefully that will continue for a couple more days.”

Shields suffered one of the cruelest golf fates on the 11th green when he had a makable birdie putt of less than 10 feet. He struck the putt well, and it looked like it was going in. Instead, it lipped out and did a horseshoe around the cup. Shields settled for par.

Brett Young had one of those wild and crazy rounds that sometimes show up to confound the golfer.

He made five birdies, four bogeys, a double bogey and an eagle...on back-to-back holes.

He doubled the par three fifth and came right back a hole-out on his second shot on the 401-yard par four.

Alec Stopperich had six birdies and three bogeys to account for his 69. Five of those birdies came on the front nine when he shot 32. He struggled to a 37 on the back.

A native of Venetia, Stopperich turned pro in November and has since moved to Tampa.

“I’m going to play in some summer events up here and then go back to Tampa to get ready for Korn Ferry Q school,” he said. “I played pretty well today. I was four-under at the turn and really felt it was out there to be had. But I three-putted on 13 and hit a bad tee shot on 14 that led to a bogey. I was able to make a 9-footer for par on 15 to settle me down. And then I made a birdie on 16.”

Rob McClellan and Matt Gurska finished at two-under par 70, with Jake Sollon and Connor Schmidt rounding out the under-par scores at 71.