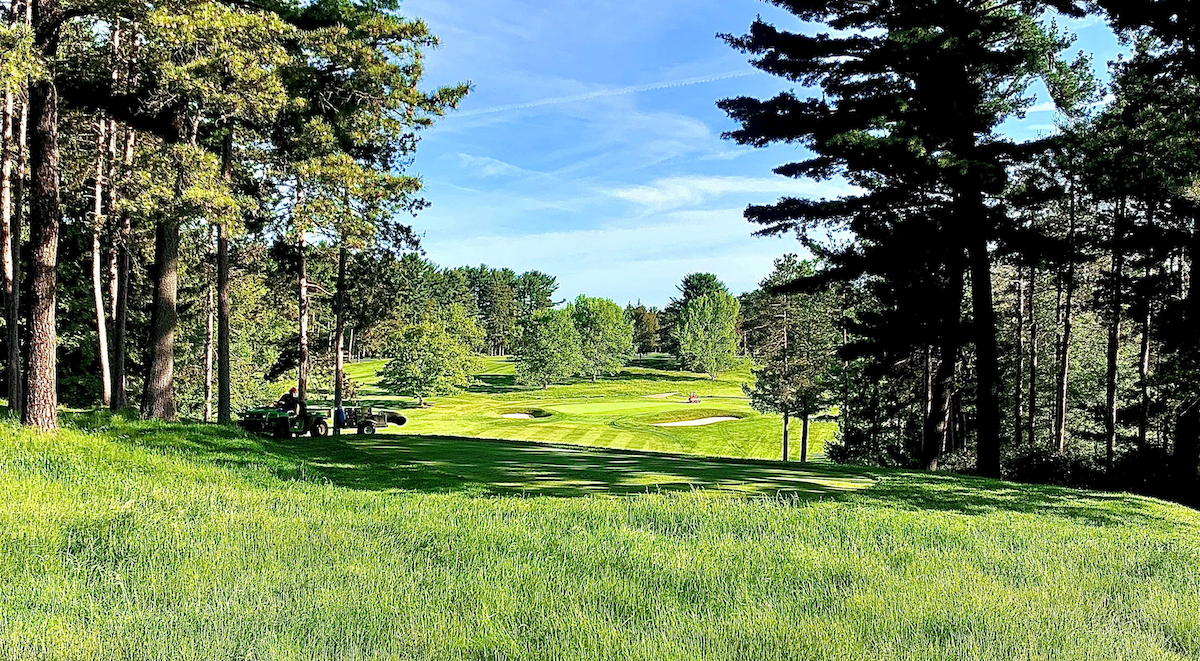 The 15th hole at Indiana Country Club, host of qualifying for the 2022 U.S. Senior Open Championship

U.S. Open Senior Qualifying returned to Indiana Country Club, where Joey Sindelar of Lansing, NY and John Aber of Sewickley, PA, looked to replicate their success from last year’s event, both of whom qualified for the U.S. Senior Open with scores of 3-under par.

Despite an early-spring season consisting of mostly cold temperatures and significant rainfall, Indiana Country Club weathered the storms and returned to championship-form. With some solar and wind assistance, the greens were running like lightning. And on top of that, the lush, thick rough made any missed-fairway shots a difficult recovery when approaching the green.

The early favorite was Robert Schustrich of Windham, OH, who fired a 3-under 33 on the front nine, including three birdies and one eagle which came on the par-5 number five.

“I was at 4-under and gave three away. Thank God it wasn’t a skins game,” said Schustrich as he reflected upon his three bogeys on the back-nine.

Carl Pelletier was the first to best Schustrich’s score of 1-under 70, turning in a 2-under 69. When asked if the course conditions were nice, Pelletier smirked and said, “Oh yes. The putting was tough through holes five or six, then I got used to it.”

With his low score, he would have to delay his nine-hour drive across the northern border until the rest of the field submitted their scores.

Jim Roy, the eventual low-scorer, walked off hole 18 following Pelletier’s group. Although most of the scores had yet to be turned in,the consensus was his 5-under 66 would be the score to beat.

Roy started out his round on fire, birdying four of his first six holes. He then finished out his front-nine with three-straight bogeys for a 1-under 35.

“I was 4-under through 6, so I thought, ‘maybe I can do it again on the back,’” Roy laughingly said.

Well, he did just that, birdying two par-fours and both par-fives on the back-nine. Even then, he was concerned his score may not hold up.

“I wish I didn’t bogey seven, eight, and nine because then, I could’ve just driven home. It is what it is and it’s out of my control now,” said Roy.

The second of the two qualifiers, Michael Molino, finished one group after Roy with a score of 3-under 68. Molino knew he’d be in the running for one of the two qualifying spots as he walked away from the scoring table. At this point, all Molino could do was watch the leaderboard as James Chung was about halfway through his back-nine.

Chung was 4-under after 10 holes, but bogeyed hole 12 to put him at 3-under par. Pelletier, Roy, and Molino waited on the patio as Chung finished his round. Chung’s score had not deviated since hole 12, meaning he and Molino both turned in scores of 68. The first U.S. Senior Open Qualifying spot was rewarded to Jim Roy while Carl Pelletier was locked in as the second alternate.

The final qualifying spot would be decided by a playoff starting on hole one between Molino and Chung. This playoff was short-lived, though, as Molino nailed the par-five green in two shots while Chung got there in three, leaving himself with a lengthy birdie putt. After Chung missed his 35-footer, Molino knocked in his short birdie putt, securing his spot in the U.S. Senior Open.

Reflecting upon the day and after securing the low-score, Jim Roy stated, “I love this course for qualifying; you really have to pay attention to every shot you take.”

Roy and Molino will compete in the U.S. Senior Open at Saucon Valley Country Club in Bethlehem, PA, June 23rd through June 26th.