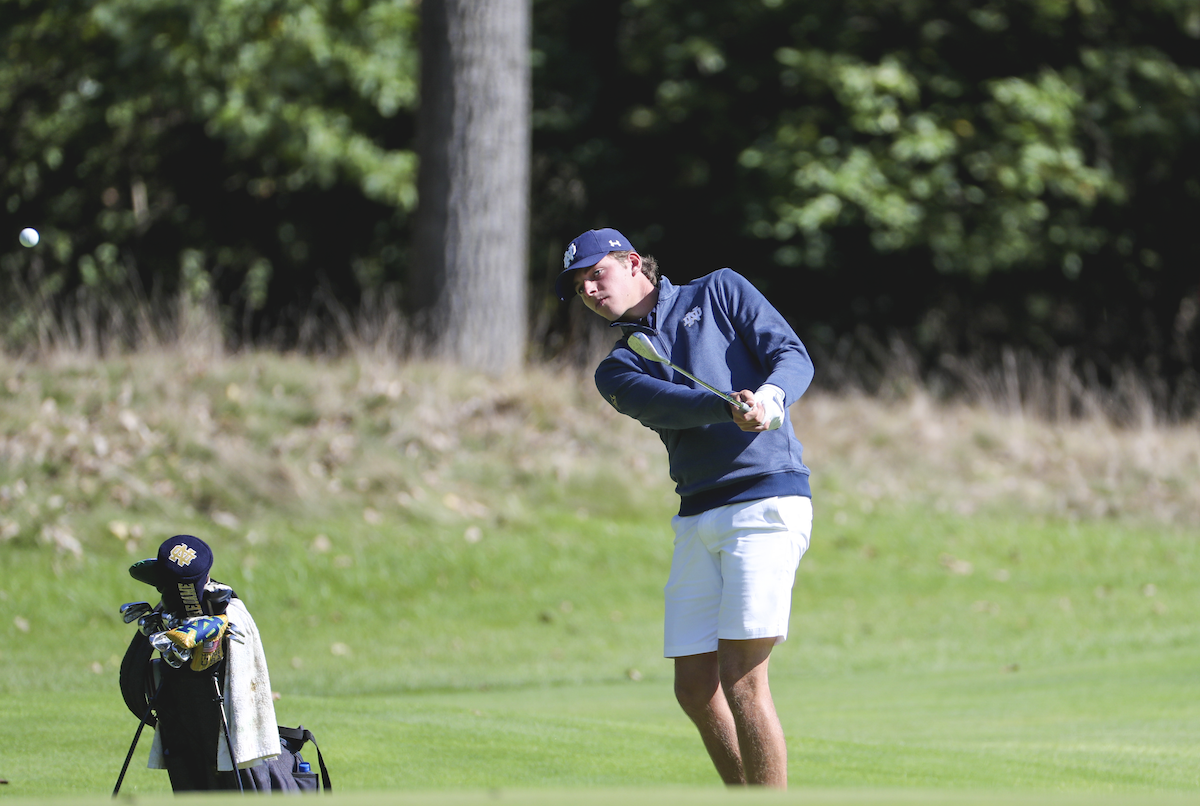 Palmer Jackson’s world of golf reached another plateau on Wednesday.

The young man from Murrysville will soon be going international.

Palmer, a junior at Notre Dame, was announced Wednesday as a member of the 2022 United States team that will compete in the Palmer Cup against a team of international players July 1-3.

“I’ve never played in Europe. I was pretty excited when I saw this event was in Switzerland,” Jackson admitted. “This will be the first time I’ll be able to represent my country for any type of competition. That’s right at the top of my list. I was named after Mr. Palmer, and his legacy and character have given me guidance throughout my life. To be able to represent Notre Dame, the United States, and Mr. Palmer in Geneva is a dream come true.”

Going into this year’s event the United States leads the Palmer Cup series 13-11-1.

The Palmer Cup went from the U.S. playing Great Britain and Ireland to a team of players from all of Europe. A further change occurred in 2018 when the international team expanded to include the rest of the world.

A unique aspect of the Palmer Cup is that the teams consist of 12 men and 12 women. There will be times when the men will be paired with women in a fun mix of formats. Mixed four-balls on Friday, Mixed foursomes on Saturday and singles matches on Saturday.

“This will be the coolest thing with respect to things in my golf,” Jackson said. “This will be an exciting year for me, I’m sure. These things don’t happen without strong commitment and hard work. Whatever else I do, I know I have to get better if I want to get where I want to be.”

Palmer has had a spectacular regular season, finishing in the top 10 eight times. He anchors the ND team that goes into this weekend’s ACC Championship ranked 13th and has had nine consecutive top-5 finishes.

Jackson’s coach, John Handrigan, was effusive in his praise of Jackson.

“Being from the same area and his family sharing the same values – Palmer was named after the great Arnold Palmer – earning a spot in this prestigious event has been a high priority for Palmer all year,” Irish head coach John Handrigan said.

“To compete at an elite level like Palmer has all year while under the pressure of earning a spot in the Palmer Cup speaks volumes for Palmer’s ability and determination. Palmer thrives off pressure and uses the energy to his advantage. Not only will Palmer represent Mr. Palmer’s event with his exceptional golf game, but he will also represent with class and character like Mr. Palmer embodied his entire career.

While the Palmer Cup may not be the most well-known of the team events, there are some very interesting numbers associated with it.

Since it began, over 125 former Palmer Cup alumni have gone on to earn cards on the PGA, European or LPGA Tours.

Thirty-two have represented Europe or USA in the Ryder Cup, Presidents Cup or Solheim Cup.