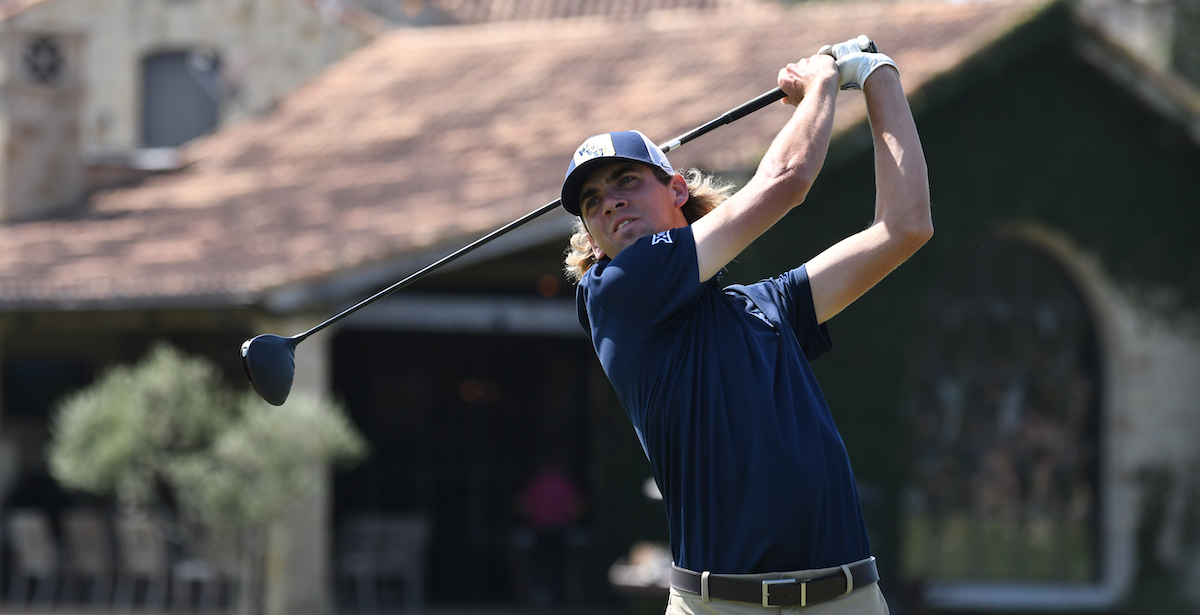 It would be corny and trite to say Mark Goetz came up aces in Las Vegas last week by winning the Lake Las Vegas Intercollegiate at Reflection Bay Golf Club in Henderson, Nevada.

The fifth-year senior from Greensburg posted a record-setting performance in a few ways. His 54-hole total of 201 (65-67-69—201) was the best-ever in West Virginia University history. He had the previous record of 202. That 15-under par total set a new mark for most strokes under par, eclipsing the record he previously set a year ago by a shot.

And the victory was his third in a collegiate tournament, the most in WVU history.

“Even more than me getting a win, it was really great to see some guys stepping up and playing well,” Goetz said. “I was really pleased to see that.”

There wasn’t a great deal of time for Goetz to celebrate because he had plans that could lead to big things for his future. Mark’s ultimate destination after the red-eye flight across the country wasn’t Morgantown, but rather Dothan, Alabama.

It is in that small southern city (population just over 71,000) that Goetz will get his first taste of professional golf when he competes in a PGA Tour Canada qualifying event at the Robert Trent Jones Golf Trail at Highland Oaks.

The qualifier was a 72-hole, no cut with benefits The 72-hole, no-cut tournament ran Tuesday through Friday. Play well and a path to play on the PGA Tour Canada becomes available. The medalist in the qualifier gets into all the 2022 events. The rest of the top 10 will be allocated spots in events as well.

“We’ll see how it goes,” Goetz said. “There has been a lot of conversation with people like my dad and a couple friends of mine from WVU who took this route. Among the things I’ve learned is that the golf is the same, it’s all the other stuff that’s involved. There’s a lot of stuff that must be taken care of.”

And, of course, his schedule will be very fluid for the time being. Regardless of what happens in this qualifier, Goetz will meet his WVU teammates at Hilton Head for a tournament, on to Georgia Southern, followed by the Hootie at Bulls Bay and closes out the regular season at the Mason Rudolph Championship in Nashville.

After that, it’s yet to be determined. He could be playing in Canada, could be playing some West Penn Golf Association events or could be hanging out at Hannastown Golf Club, where he’ll no doubt be practicing and playing.

One other tidbit of note. The victory in Las Vegas was the first for Goetz away from WVU’s home course, the Pete Dye Golf Club.

“It really was a very strange week,” he said. “I asked myself a couple times, “how did I get into this situation?” I’m not that familiar with bent grass and playing up north. I played very conservatively off the tee all week. I could see that if you got off the fairway even a little bit, that was going to be no good. I basically hit my tee balls at the 150-yard markers, hitting a bunch of 2-irons. That’s what made it so strange, I normally have driver in my hand all day.”

Currently, Goetz plans to remain an amateur until the Frank Fuhrer Invitational. He said long-time amateur star Sean Knapp has asked him to play in the West Penn Four-Ball and he hopes he might be able to play other WPGA events, again, depending on how his schedule works out.

“It was really cool on many levels to get a win in those conditions,” he said. “We’ll just have to wait and see how it all works out.”