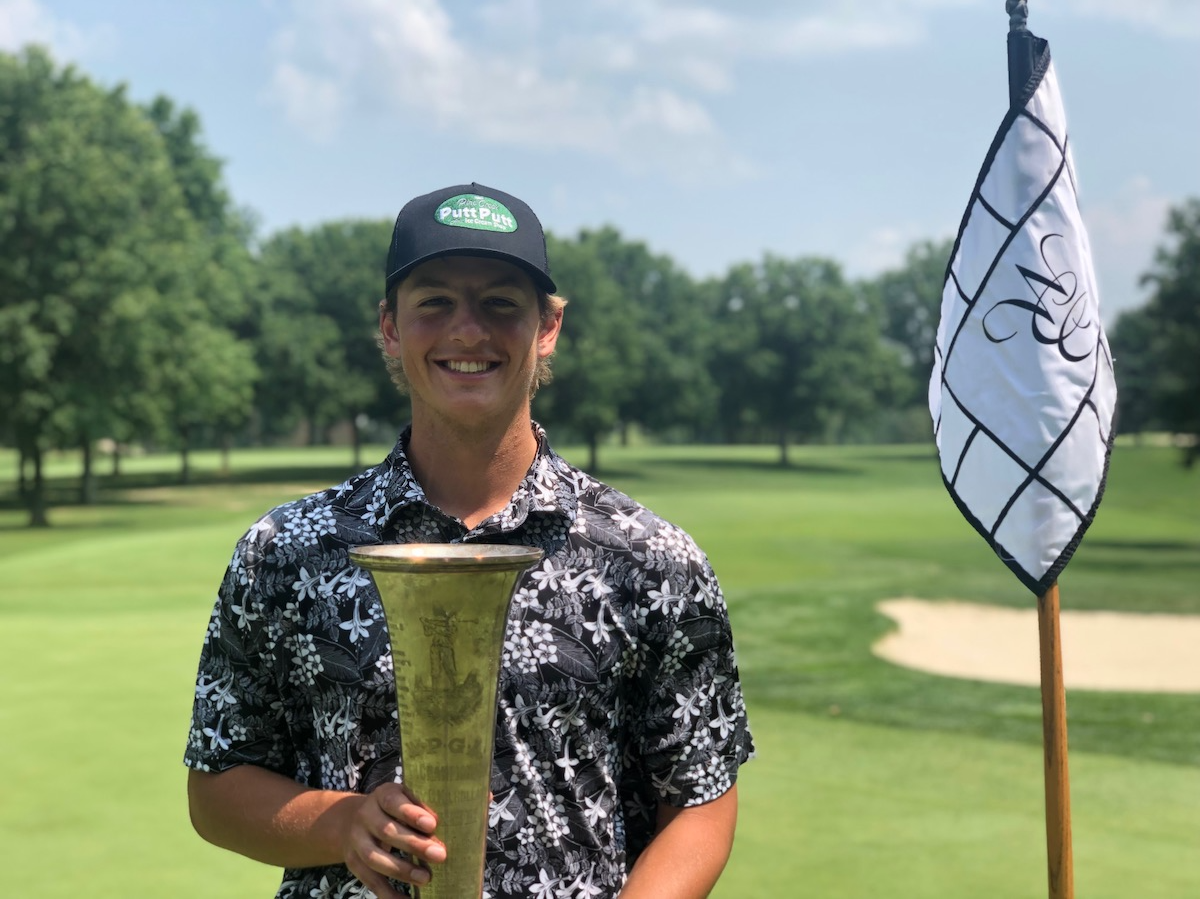 After the way things had transpired throughout the day Wednesday at Westmoreland Country Club, there really wasn’t any other way for the 118th West Penn Open Championship to end but by a chip-in, right?

And guess what? Gregor Meyer stepped up to his ball that was sitting in the rough just off the 18th green, got comfortable with the shot, executed a sweet swing and watch his ball bounce and then roll some 30 feet before disappearing into the hole.

In addition to securing his first WPGA title, Meyer’s chip-in dashed the title dreams of defending champion Mark Goetz and Palmer Jackson, both of whom were at 6-under par, along with Meyer as he approached the final green.

“I couldn’t be happier for Gregor, he’s just a great kid,” Jackson said. “I put my all my heart into this one so there’s major disappointment. But I said that if I posted an over-par round, I didn’t deserve to win.”

Palmer shot a three-over 74, a score that was primed by bogeys on the second and third holes and another on 15. Goetz posted a 67 and was just another made putt or two from finishing in the lead a group or two before the last group.

But that wasn’t the way things went down and, on this occasion, Meyer made the shots when he had to and was the guy holding the trophy when it was done. And, considering the journey he had to travel to get to the 18th green, he may well have been the most deserving of anybody.

On 15, he hit his tee shot left but was able to maneuver it onto the green and made the putt from 12 feet. On 16, the theatrics ramped up more. He pulled his tee shot 50 yards left of the course and was faced with trying to thread a shot through what looked like a forest to get through to the green.

“I hook the ball and I hit that one pretty well,” Meyer said. “I got the ball into the bunker, blasted out to about 12 feet and made that. Once I went to 17, I knew that if I could birdie the last two, I could win. I didn’t expect to chip in, obviously, that was a bonus.”

What wasn’t a bonus for Jackson and Meyer was the starts they got in the final round. Jackson bogeyed two of the first three holes and Meyer bogeyed his first three. On the other hand, Goetz birdied his first two holes to cut Jackson’s lead in half.

But that’s about the time the music stopped playing and everybody took a seat. For what seemed like quite a while, there was no movement at the top of the board.

“It was an up and down day out there,” Goetz said. “It was just weird some of the things that were happening. I didn’t hit it as solid today as I did yesterday. I started out better, but it just wasn’t to be. But the big thing is Gregor, he’s joining the party. He’s been playing really well and it’s great to see him win.”

A dozen players finished the Open under par on a WCC layout that was in great shape and played well, despite having been hammered with rain over the last week.