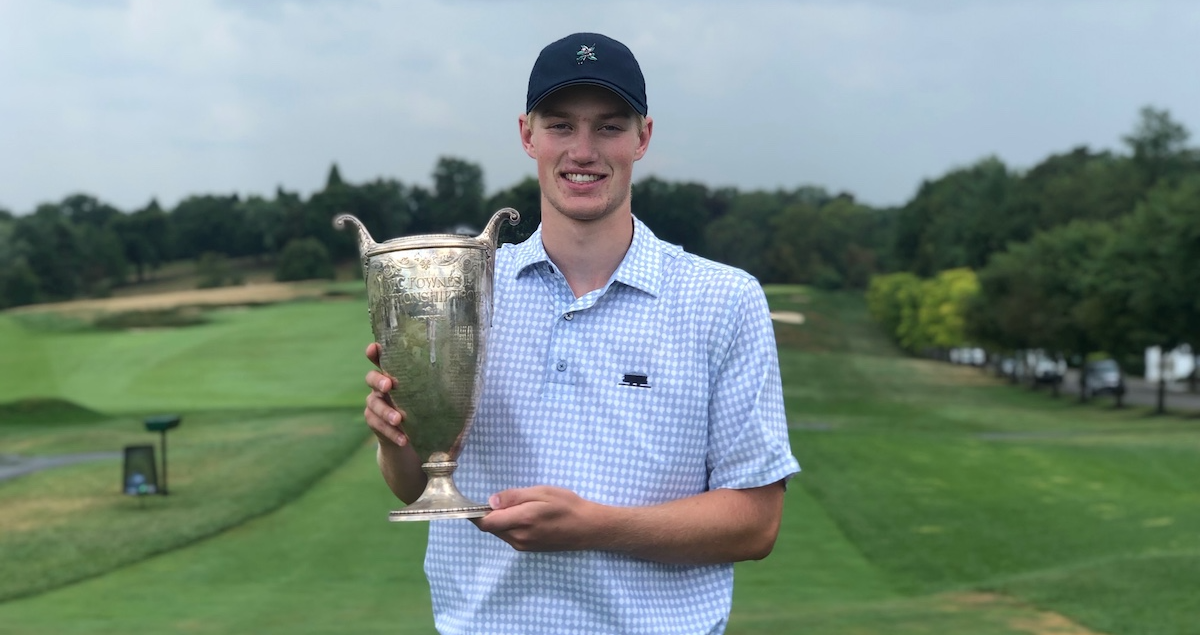 SEWICKLEY – Sean Knapp did it.

Nathan Smith did it.

And now Connor Schmidt has done it.

‘It’ in this case is winning the historic West Penn Amateur championship multiple times. Schmidt followed up his 2019 title at Oakmont Country Club with a strong performance Monday and Tuesday at Allegheny Country Club to win by a pair of shots over Kevin Fajt of Greensburg.

“It means a lot to do it back-to-back,” Schmidt, who lives in Peters Twp., said. “Sean and Nathan did it. Arnold Palmer’s name is on that trophy and that makes it even more special.”

Schmidt couldn’t have started the second round in much more spectacular fashion. He birdied six of the first seven holes and looked like he was going to have his way with this spectacular course in a big way. Only a slick downhill putt on the par 3 third hole foiled his attempt to birdie his first seven holes.

“I’ll tell you what, he’s an absolute stud,” Kowalski said. “But I look forward to our next battle. Monday I felt like I was on cruise control, but I never really felt comfortable with any part of my game. I knew I was going to have to have my A game today and I didn’t.”

Schmidt’s sparkling start resulted in a front nine 30, but if he was feeling comfortable at all heading toward the 10th tee, that feeling left quickly.

His tee shot on the 606-yard par five headed right hit the hard ground and slope and disappeared to parts unknown. He hit a provisional ball that found the fairway and hit his next shot to the fringe. Lying four, Schmidt was hoping to get up and down for bogey. He couldn’t and took a seven.

“I really didn’t get rattled by that double,” Schmidt said. “I knew there was a lot of golf to play and I just had to keep playing.”

Schmidt no doubt thought there would be more of those birdies on the back nine, but the weather started to change in a negative way as gusty winds started to bedevil the late starters and make ACC even more difficult. And it wasn’t just the wind, it was that the wind came from every direction.

Schmidt made five straight pars after that double and that was a good run as those chasing him weren’t able to do as well or better and nobody was able to make a serious run at him.

It also seemed as though there was an invisible wall of some sort at 4-under par as several players got to that point but couldn’t get any deeper.

“Yeah, it did seem like that,” said Kevin Fajt of Greensburg, who finished at 4-under but knew he left a couple shots out there. “I’ve been playing well recently and I played pretty well here, but left a couple out there.”

Schmidt made a bogey on the tough 16th and pars on the last two holes to finish with a 68. And within seconds of the last putt dropped, the skies opened.

“It was pretty challenging out there on the back, especially if you weren’t hitting it straight,” Schmidt said.