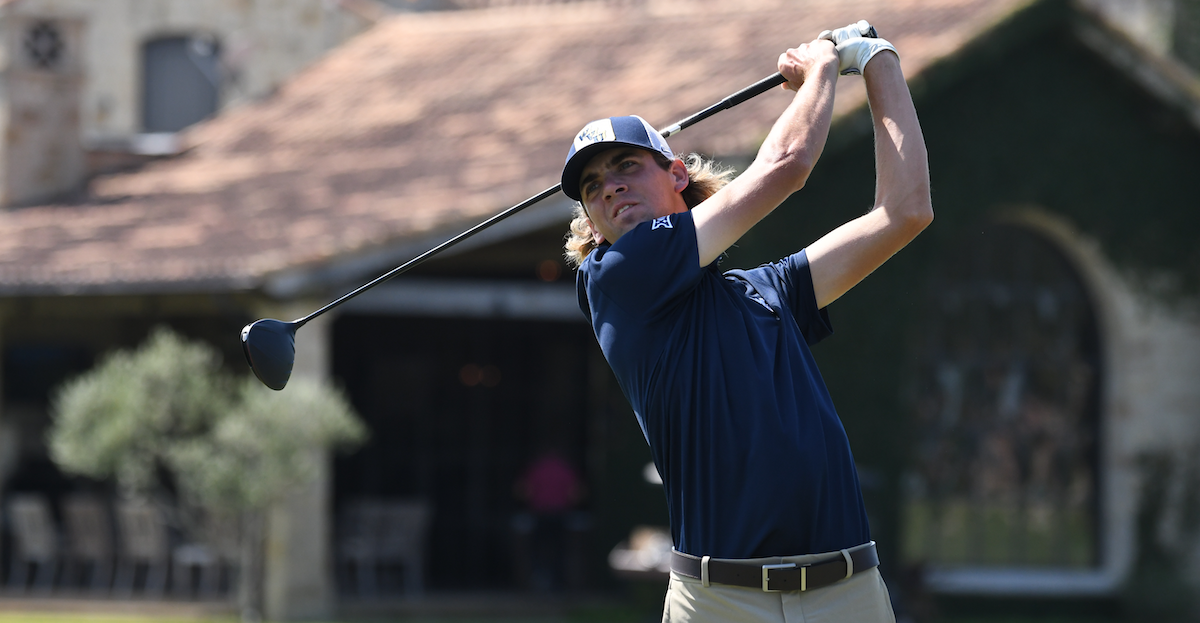 It’s easy to judge an athlete’s season as “the greatest ever.” People will say things like that, without really putting that great season into perspective because as folks sometimes forget, there have been other great seasons down through the years.

But when look closely at the golf season turned in by Greensburg’s Mark Goetz, it was, um, one of the best ever. The fifth-year senior at West Virginia University dominated players and golf courses in such a manner that he was an easy choice as the 2020-2021 Frank Fuhrer III Collegiate Player of the Year.

Starting with the 2020 West Penn Open at Shannopin Country Club through the 2021 U.S. Amateur at Oakmont Country Club, Goetz was a beast. And that referred to just his efforts in local and regional amateur competitions.

He had a great season in WPGA events as well and was, well, rather beastly in those as well.

“It’s pretty cool,” Goetz said in his typically understated fashion. “It’s not something I really thought about much because I didn’t think I could win it. There are a lot of great players, both in amateur and college events. It’s pretty special.”

Goetz’s prodigious length made Shannopin easy pickings for his game, but it took a late stumble by Dan Obremski for Goetz to get the win. And that was the springboard for outstanding year.

In 2021, Goetz came with a 30-foot chip-in from the fringe on the final hole by Gregor Meyer at Westmoreland Country Club to repeat as the Open champion.

Not long after that heartbreak, Goetz competed in the State Amateur at historic Merion Golf Club not far from Philadelphia. He played well there as well, putting together rounds of 74-68. As he walked off the final green, Goetz and Patrick Sheehan of Talamore Country Club, were tied for the lead, a shot ahead of John Peters who was standing on the 18th tee.

His drive left an uphill shot of 184 yards to the hole. Believe it or not, that 9-iron shot flew into the cup for eagle to pull the rug out from under another possible Goetz victory.

Goetz was named as a finalist for the Ben Hogan Award August of Month for the first time in his career. Included in that month was earning medalist honors in the stroke play portion of the U.S. Amateur at Oakmont CC, posting 8-under par. He unfortunately was knocked out of match play in the first round.

His 2021 season at WVU was historic. He picked up his first college victory, putting up a 12-under par total at the Pete Dye Golf Club, WVU’s home course. Goetz qualified as an individual to the NCAA Golf Regional, another first for WVU. He also missed qualifying for the NCAA Golf Championship by a single spot.

Not long after that he was named the first All-American in program history with Golfweek magazine gave him an honorable mention.

“I remember driving home from that [regional] tournament thinking that this kid is going to play professional golf. And he is going to win on the professional tour. “This kid prepares and thinks the right way and he has all the talent and all the tools. I have never seen a more relaxed Mark Goetz in my career. He knows he has put in the work, and he has definitely become a leader for us,” WVU coach Sean Covich said.

The lure of professional golf is always there for players with the talent and work ethic Goetz possesses. Goetz has those same dreams but believes there are things in his game that need to be worked on. That was just one of the reasons he opted for his fifth season at WVU.

“I was so happy to be playing at a high level,” he said. “I guess I didn’t realize what I was capable of, took me about a year and a half. It was a little upsettling for me, playing awful like I did in my sophomore year at WVU. I really didn’t feel like I belonged. But I started to watch other good players and see what was going on with them. When I got to that point, I started to realize I could compete.”

As he continues on his journey toward living and competing in the “Big Show”, Goetz was quick to give credit where he believes it’s due, beyond his family and friends.

“I have a ton of respect for the West Penn Golf Association,” he said. “That’s really where it all started for me. Getting this award is truly an honor.”