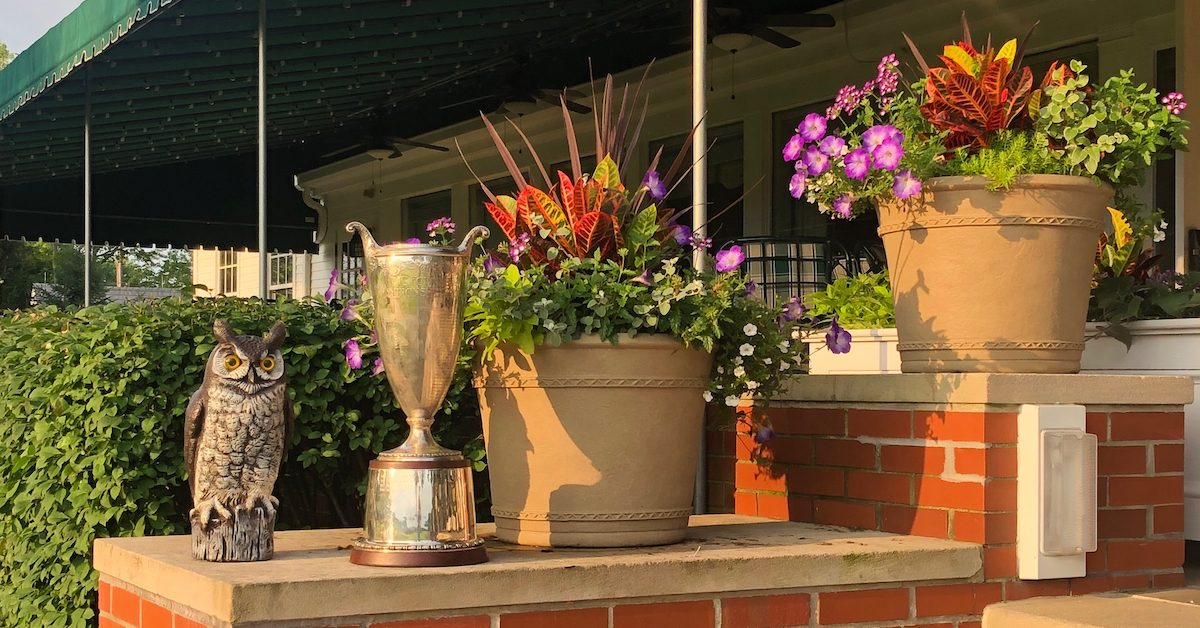 The W.C. Fownes Jr. Trophy for the WPGA Amateur Championship

Jackson takes a two-shot lead into final round
By Mike Dudurich • July 3, 2019

OAKMONT – In modern sports parlance, Oakmont Country Club is a tough get. It has lived up to that reputation over the years and over the first two days of the 119th West Penn Golf Association Amateur Championship.

Unless the strong and heavy rains and storms Tuesday night softened the historic layout, chances are OCC will be a tough get again today in the final round.

Thirty-four golfers made the cut into the final 18, led by Palmer Jackson, who had posted rounds of 72-70—142 and is the only player at even par. He leads Kyle Grube by two, Mark Goetz by three and Connor Schmidt by four.

“It’s nice to have a lead but the thing right now is to keep going, keep playing good golf,” Jackson said. “My mindset is I want to keep going lower and lower. That’s what drives me.”

Jackson got all the motivation he needed in that regard when he received word that Schmidt had gotten to 5-under par through 12 holes Tuesday. “I knew I had to keep getting lower and lower,” he said.

Schmidt got off to a great start, shooting 32 on his opening nine and made another birdie on 12, but two bogeys and a double wiped out his advantage, leading to a round of 72.

“That bogey on 14 was really sloppy,” Schmidt said. “All I had was a wedge in and just pulled it. On 15 I pulled it. On 15, I hit my drive into the church pews, but made a great par save. Sixteen was playing 230 yards into the wind and I hit it into the bunker and made bogey.

“On 17, I hit 3-wood off the tee and just left it out a little to the right. I pretty much had no shot. I hit it into Big Mouth, knocked it into the bunker on the other side and made double. I burned the edge of the hole for birdie on the 18th and made par. I just have to keep playing one shot at a time.”

Unfortunately for Schmidt, he has a bit of experience in this area. Last year, in the West Penn Open, he had a three-shot lead heading into the back nine. He felt like he played well in those first 14 holes and missed a pair of makeable birdies that could have made a big difference in how things turned out.

James Gillam won the playoff on the fifth hole.

“I figured I had to shoot 71 or lower today and I did that,” Schmidt said. “I did what I had to today and feel like I’m in a good spot going into tomorrow.”

Palmer knows a two-shot lead is at best precarious and that he’ll need to keep the pedal to the metal if he expects to hold off the group of contenders close behind.

“To win this would be good, really good,” he said. “But there’s a long way to go. Where I am gives me a really good chance to win. When you think about who has won this event and who has won here, it’s special.”

Tee times began at 7:45 with the final trio of Jackson, Grube and Goetz getting underway at 9:35.